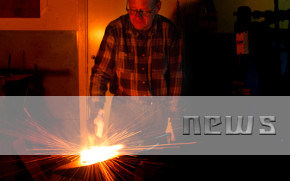 GoS announced on September 10th 2021 that master bladesmith Johan Gustafsson is leaving the company, which will continue to operate under the name GoS with Co-founder Patrik Sjögren as CEO, watchmaker and sole owner.

Over the years, Johan's organic damascus steel has been an intrinsic element in GoS watches, as the brand established itself as the "King of damascus steel in Horology". Building our brand with its unique identity has been a rewarding experience, and GoS wish Johan the very best of success in all of his future endeavors.

Looking to the future, and building upon that reputation, GoS is proud to welcome Swedish master bladesmith Conny Persson to the team. As well as being a master in the art of traditional damascus steel, Conny also specializes in a technique known as Mosaic Damascus steel which will bring an additional dimension to GoS watches. He has an exceptionally high knowledge of materials and how different forging techniques can create his beautiful three-dimensional patterns.
His talent and passion for the craft saw him achieve the award for "Knifeblade of the Year" (Norway 1996), only five years after having started with patternwelded steel. Three years later, he received the award Best Damascus Design in the Blade Show (Atlanta 1999). To date, Conny has received a total of 11 awards across the eight years he was actively exhibiting before he decided to spend more time at home with his family.
Conny received the second chair in the Swedish Knife Association's Hall Of Fame in 2008 with the following motivation: "He is a true pioneer in damascus steel forging which, with his accuracy and feeling for steel, has led the development of Swedish forging forward to today's top international position."
He has continued to develop his art throughout the years. His production ranges from elegant fixed blade knives to highly intricate longswords, with clients all over the world. The first GoS collaboration will be Wildflower dials with a more symmetric pattern than the original GoS Wildflower to feature Conny's skills in both pattern control and forging. We already have more ideas for the future and look forward to developing our collaboration.